‘Hot, today, innit?’ said Nim to Ard one Monday morning as the white sun started baking the ground, their backs, their thoughts.

‘Very hot. Pass me those bricks mate, don’t hang about!’ Ard replied. ‘Any plans for this evening then?’

‘Not a lot, eat a few onions, drink my beer, usual stuff.’

‘Your wife burn the bread again today then?’ Ard joked. Nim rolled his eyes and dropped the bricks at his feet.

‘Watch it! I don’t want to have them falling off the scaffold at this height!

‘Hoot, today, onnit?’ said Nim to Ard that Tuesday morning as the white sun started baking the ladders, their foreheads, their minds.

‘Ow! You get blackbread dayday? Ha!’

On Wednesday morning the white sun rose above the mountains, baking the bricks, the tools, the flies, before Nim and Ard arrived at the building site. Ard was hobbling and leaning on a crutch. Nim had hardly slept. His wife had been talking nonsense to him all evening.

Ard glared at him.

Ard glared again. Nim turned and picked up a brick.

‘Up now woodroad to tippytoppy, mate.’

Ard growled again and started climbing. Nim followed, his bag of burnt bread swinging from his back. He would have to have words with his wife again. What was she thinking letting his bread burn every day this week?

On Thursday the white sun rose high in the sky, baking the sand, the roofs, the snakes, before Nim got to the building site. Ard was nowhere to be seen. Nim loaded bricks on to the pulley and started climbing the ladder. As he reached the top he stopped for a rest and a quick drink. Nim opened his bag and looked inside. His flask of beer was getting warm. And something else was wrong. There was a stone instead of a loaf of bread. A large white stone. At least it wasn’t burnt, he thought. He took it out, scratched his head and dropped it over the side of the scaffold.

Far below, a cry of pain and indignation rang out. 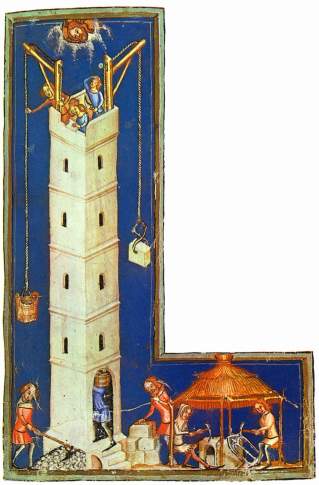 ‘Donkeybread!’ said Nim to himself.He stayed up the scaffold for the rest of the day.

On Friday, the white sun climbed again and hung, baking the stones, the fields, the dry mouths.