October is a full-on month here, including the high school open evening, visits to friends and by others, appointments, meetings, seminars, lectures and a short break at the end of the school half term week to mark our wedding anniversary.

Faye has learned to fit around us and our comings and goings. On many occasions she is involved in the comings and/or goings herself, usually without much fuss or complaint.

Early in the month we all dropped out plans however to fit around Faye and treat her to a walk with 60 other greyhounds, in Brandon. She was clearly very happy and waggy to see some of her friends again (human and canine) and didn’t seem to mind the noisy planes overhead.

It really was odd walking for almost an hour with so many greys. A few dog walkers with other breeds passed us in the opposite direction and looked surprised to see so many of us. The walk happens every few months of course, but the pack of greyhounds were remarkably quiet and well-behaved on the whole. We met and chatted with a number of other greyhound owners, and learned more about other dogs.

Faye has discovered some other walks as well in our area. She has been to the Gog Magog hills south of Cambridge, on the recommendation of various friends, although we learned the hard way that the running field is not enclosed (!) and I have found one or two walks I can do from our house to different places, which has been fun. 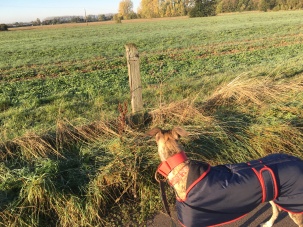 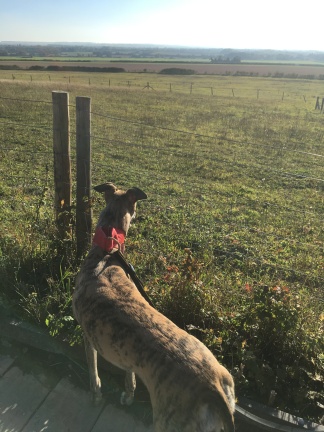 As ever, it doesn’t take much for Faye to spot a squirrel. She seems to have a whole section of brain devoted to it. Maybe it’s the section I would have assigned to common sense. I thought she had worked out about not getting tangled around posts, but some days it is just too difficult… 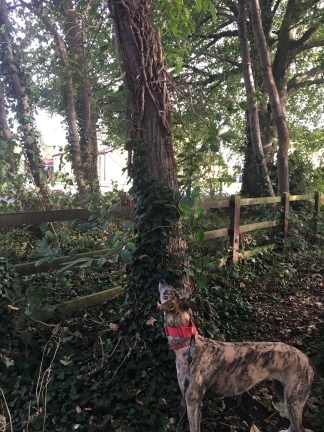 She usually stands still and hopes the problem will go away. You can see I am pulling on her lead here too!

That said, she does seem to spend most of her time asleep, often waiting for me to finish whatever project I’m working on that day. I love giving her empty cardboard packaging with leftover kibble for her to work on, and occasionally she gets the last bits of the peanut butter. At least the peanut butter jar stays intact and doesn’t leave the floor strewn with torn up card and paper.

Last weekend we went away, and in the process took her for a little walk before dropping her off. We got to a cattle grid and she wasn’t fazed at all, but took a leap and showed us again how powerful her back legs are. She didn’t quite clear it from a standing jump, but she was happy to jump back again on the return. We dropped her off with some of her greyhound friends for a few nights, and she did brilliantly again, even helping the ‘new kid’ settle in.

Last night was the Light Trail in the village, put on by the local churches. Although we didn’t get around all the stops, Faye loved having an extra walk and wore her bright lead light and even got herself a couple of glow-sticks. She wasn’t allowed into the light disco, so she stayed outside and tried to get herself a sausage, but didn’t quite manage it.

So, we are well into coat weather and nice cosy rests by the fire. I’m not as bendy as Faye when it comes to sleeping, but I also love long walks in the autumn and coming home to relax afterwards.

Don’t get too cold this month!

© Lucy Marfleet, 2015-2022. Unauthorised use and/or duplication of this material without express and written permission from this blog’s author is strictly prohibited.