Faye was not impressed this month when I finally got around to chopping up daddy’s old, threadbare dressing gown so that she had something cosy to wear on cold nights. On the first night she managed to escape from it, and even shook her house collar off in the process. Subsequent occasions proved no better; it must have felt all wrong, or smelled funny. I had seen a lot of hounds wearing lovely PJs on the Facebook groups I joined for Greyhound owners, and after some thought, and in order not to have to put the heating on when the temperature drops at night, I ordered her a fleece nightcoat, in racing green. Ok, olive green, but I’m sure she goes pretty fast in her dreams. The colour doesn’t really show well here; perhaps she’s dreaming of accelerating quickly enough to fly. Superdog! I was able to order her fleece from the Retired Greyhound Trust here. 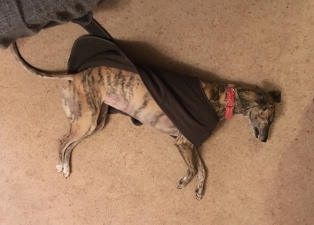 November is a month for fireworks, and dogs are known to get very frightened of the loud noises and sudden explosions. Faye is not keen on surprises, but she didn’t seem to mind any fireworks we encountered on twilight walks. However, I didn’t want to have her worried when the major local events were on. Our daughter Lily is averse to the sensory overload of fireworks events with thousands of people, distracting music, smells of food and a long wait in the cold, followed by noise and shocks. This year Lily, Faye and daddy stayed at home, while I took Joseph to the display.

We had found when we first adopted Faye that having a calming oil plugged into a socket near her bed had been valuable in settling her, and we have a spray we can use out and about if we need to. In the end, with her relaxed attitude to fireworks we didn’t need to calm her down as it happened. She’s far more likely to yelp if she is worked up about going out for a walk. Crazy girl.

A first for us this month was a trip to the vet for a growth on Faye’s back, in her shoulder area. The abscess had been there for quite a few weeks and looked harmless, but we weren’t sure what to do about it. Greys, like other dogs, can get spots and growths, but this one kept growing and didn’t look too good to me. It was also painful for her. An internet search had given me some nerves over the many possibilities, so in the end I booked her in to the vet and went along to see what they suggested. The vet was very good and shaved the area before piercing it; we were both relieved to discover it was a simple abscess and nothing dangerous to Faye or that would need cells sending off to a lab. It had already grown to the size of a broad bean, but thankfully is healing up well, and at this time of year her shaved area won’t be on display all that much. 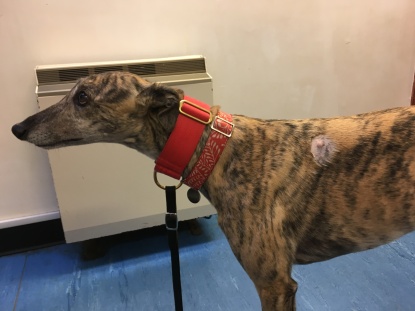 While I was at the vet I asked for Faye’s microchip to be checked, which was worth doing as we learned it had never been properly registered to us, despite adopting her in February. I have chased this up with the Greyhound Board of Great Britain and registered her as our pet. They keep records of retired racers and having our address and details associated with Faye’s microchip is very important to me, just in case she ever runs off and is found by someone else. (She does have my number on her collar, but that does occasionally come loose).

Faye has really enjoyed cosy evenings at home by the fire, especially if she has has the opportunity to tear up a cardboard box or a good ear rub. She has to get her walks in a little earlier at weekends if she is to get out while it is still light, but even sighthounds use their noses a lot, and she gets very excited about finding interesting* smells.

*Interesting for Faye might include: small animal smells, checking other dogs’ weemails, occasional fragrant plants and new items in her path. She was not all that fussed about a small animal hole we found yesterday, however:

While I work, Faye likes to curl up nearby, often in the same room (releasing toxic gases at times), and sometimes in the hallway watching the world through the window. She tends to sleep with one leg under her tummy while I work, but when she’s really crashed out she will melt on to one side and splay out. There is no logic in where she lies down; sometimes she is on the duvet or dog bed, having ‘dug’ at it for comfort, but at other times she misses the soft areas entirely.

I’m pleased that she’s so relaxed at home (except of course for the toxic gas emissions), but out and about she can go rigid instantaneously when there is prey in sight. At a writers’ group last week she came across a cat through a doorway, and froze. We realised what was happening before she had the chance to act, thankfully. The cat was not keen to meet Faye and doubled up in height, all the while trying to out-stare her from a table. Faye had wanted to get close or chase the cat, but obeyed our instructions and allowed us to keep the cat away. It did cause her some confusion when the doors were closed and she was stuck in a room with people eating lunch though – she would normally excuse herself when we are eating.

She’s such a super pet. Like so many other greyhounds, she is a wonderful breed to own, even if you’ve never had a dog before. In Florida, lots of greyhounds are going to become available in the coming months as the racing tracks close, following a vote on the matter. In the UK there are hundreds waiting to be adopted, after retiring from a racing career. They love a bit of a run at times, but mostly they just sleep and want to chill out with you. I cannot recommend them highly enough. Click on the picture below for more about adopting a grey.