Time to share some of the books I enjoyed reading the most in 2021. For the first time I consumed some books through Audible, although two were over 20 hours long and I don’t feel that the audio experience suits me as much as reading regular books, so am pausing that adventure for now.

My choices are geographically eclectic, with a writing and theological bias and a quest for excellence across fiction and non-fiction. I took up suggestions and read various book gifts as well as digging into the ever-growing home library. Perhaps because I chose longer books than in 2020, I did not complete quite as many as I hoped, but am still averaging 80 finished books per year, which I am pleased with . According to my rules this may not include pamphlets, magazines, books of the Bible in English, or anything left unfinished. So what were my concluding recommendations? Read on…

My son (11) and I are working our way through Andrew Peterson’s Wingfeather Saga, a fast-paced fantasy world adventure about three children discovering who they are. The world of Aerwiar (pronounced ‘ere we are’) is full of danger and surprise. Towards the end of 2021 we completed the third book: The Monster in the Hollows and I think the quality of the writing is improving with each new story. We are reading the final book now and I will miss the characters when we do finish the series. The plot teases and unravels gently, the characters are rounded and intriguing and there are plenty of imaginative monsters and locations, as well as familiar animals and ideas to help younger readers. The series is ideal for bedtime story reading and for 8-12 year olds with a sense of curiosity and adventure. These books have a wholesome message without being preachy and the pictures are beautiful. There is also talk of a spin-off television adaptation in the works.

Lots of wonderful fiction this year and a theme that runs through these choices is that the telling of each story was masterful and original. These comprise well-known bestsellers as well as some which should be read more widely. 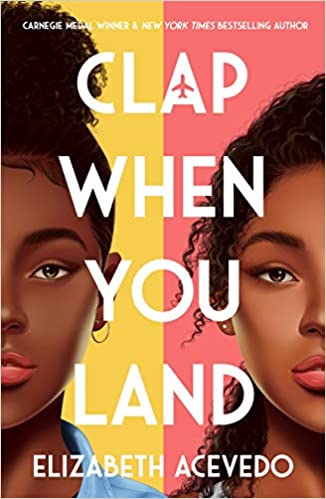 Elizabeth Acevedo’s Clap When You Land tells of two sisters who learn of each other’s existence when their father dies. The narrative is told in free verse alternately by both main characters. I particularly liked the poetic choices (for example the three line and four line stanzas which identify Camino and Yahaira) and the way that the characters kept their individualities while discovering a number of things they had in common. The descriptions of the Dominican Republic were colourful and highly evocative and the twists continue as the narrative develops. 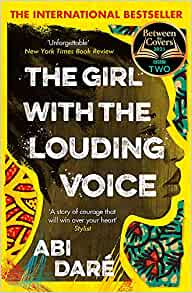 Abi Daré’s proficiency in writing justifies her awards for her first published book, The Girl with the Louding Voice. I was gripped by the character of Adunni, the same age as my own daughter (14). Sold into marriage as a third wife in rural Nigeria, Adunni runs away when disaster strikes and has to work without pay as a housemaid in Lagos, constantly at the mercy of those around her. The narrator’s English is weak, so her first-person telling contains lots of fascinating phrasing, much of which may reflect her Yoruba mother tongue. The plot is rich, the characters more so and the ending satisfying. I look forward to more of Daré’s writing. She writes with a distinct voice of integrity and pitched this perfectly. 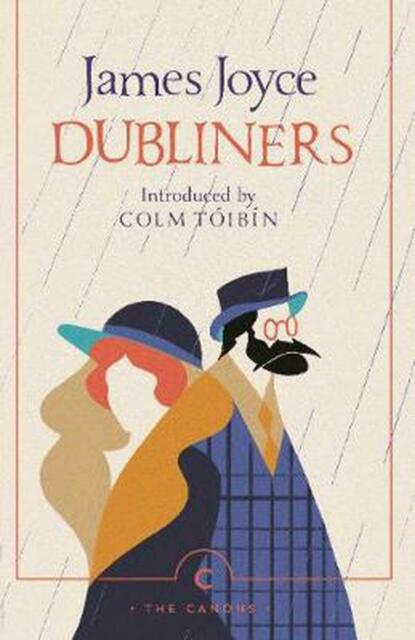 James Joyce is the only male writer on this fiction list and his is by far the oldest publication which made my ‘best reads’, but I had wanted to read some of Joyce’s writing for a long while. On visiting Dublin in 2019 and deciding I really didn’t feel ready for his heavier works, I bought Dubliners, a set of short stories detailing the lives of a number of characters of the city. I am glad I knew a little of the geography of the place by the time I read this and felt that Joyce described his people cleverly as they found themselves moving around and taking different trajectories in life. Several stories were quite sad but each story was complete in its own way. A great masterclass in short stories and what works well in this style.

The Beekeeper of Aleppo by Christy Lefteri tells how Nuri and Afra, a married couple, flee Syria and try to reach Britain. It is told entirely in the first person by Nuri, who is (/was) a professional beekeeper. Each chapter has two halves told in the present and then the past tense and linked by a single word. The idea of the past and present weaving together like a marriage is powerful, as are the motifs of sight, bees and death. The couple’s relationship is strained enormously by the tragedies they endure on their journey and although the topic is necessarily political and difficult to engage with at points, it is all the more powerful for it. Beautifully told and utterly moving. 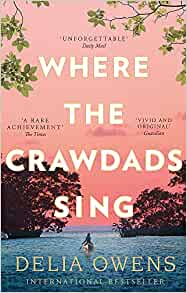 Delia Owens’ Where the Crawdads Sing has split critical opinion: some people love it and others hate it. I found it compelling. Kya has grown up in the marshland of North Carolina, at one with the natural world around her and for the most part shuns people. When a body is found in the marsh, she becomes a key suspect. How this tale of murder mystery and coming of age plays out, with wide shots, flashbacks, twists and intrigue is imaginatively vivid and ripe for translation to cinema (and will in fact be released in June 2022). If reading the book before seeing the film matters to you as much as it does to me, I recommend getting hold of a copy before this summer.

Sue Russell’s book The Healing Knife tells the story of an obsessive surgeon, Rachel, whose life is upended by a grieving and angry parent after a patient of hers dies. It is set in England and France and is carefully observed and clearly well-researched. The main character has to go on a journey of her own and there are no quick fixes. I thought the story read very well and that the dialogue was strong. It is written from a Christian perspective, which means prayer and belief do feature, but only as far as they keep the story moving. I felt that the range of characters was wonderful and was able to lose myself in the story.

Three utterly different choices here, which could each be called ‘biographical’.

Hadley Freeman’s House of Glass is a recounting of several generations of Freeman’s family through twentieth century Europe and America. The Jewish family experience segregation and difficulties in Eastern Europe and France (indeed, concentration camps feature), before taking quite different career and life directions. Freeman uses some amazing primary sources and uncovers various interesting tales about her uncles and grandparents. I wouldn’t usually choose to read a book like this, but it was promoted in the Cambridge Literary Festival and I found the premise intriguing.

The Thrilling Adventures of Lovelace and Babbage; The (Mostly) True Story of the First Computer by graphic novelist Sydney Padua is quite unique and despite the cartoons, is really aimed at adults with an interest in history and computing. Padua uses humour and a huge amount of historical research to convey with graphics and many, many footnotes how Ada Lovelace and Charles Babbage came to invent the Difference Engine. Along the way we learn of some ridiculous (but true) details as well as some other clever untrue details (which are no less ridiculous). All the great and the good of Victorian society seem to feature (and some of the less great/good). A super gift for that Difficult-to-Buy-For-Engineer in your life.

Tom Wright’s Paul; A Biography was a book I had hoped to read for some time. In fact, my dad’s copy had been sitting on a To Be Read pile for a while here. I was pleased when a local ecumenical theology reading group chose this for their current book and have really enjoyed working through Wright’s retelling of Paul’s life story and mission, with reference to Acts and all the Pauline letters as he understands them. Reading the biblical passages alongside this book was eye-opening and Wright – while at times overly wordy – is nevertheless a humble and diligent scholar who knows how to make a case well. 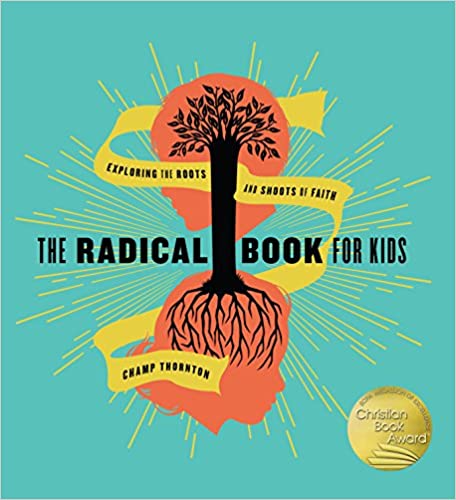 This unusual book is one I have recommended to many friends and family. The Radical Book for Kids; Exploring the Roots and Shoots of Faith, by Champ Thornton includes dozens of short and colourful chapters in no particular order, detailing elements of the Bible and Christian history and faith. It is easy to dip into, visually exciting and a great introduction for children around 7-11 new to faith or church. 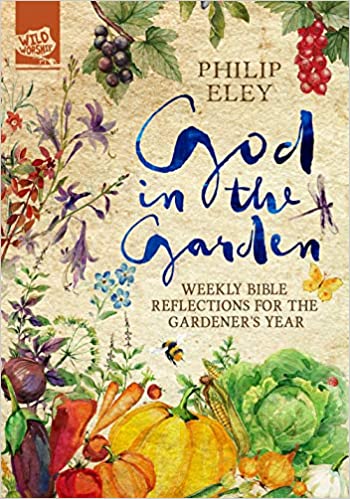 It took a year to read, as there is a short chapter for each week, but God in the Garden; Weekly Bible Reflections for the Gardener’s Year by Philip Eley was a lovely devotional for Monday mornings. I am not a great gardener and have much to learn about plants, but this book combined practical advice with teaching on gardening basics, linking themes to the Bible and giving a chance to reflect and pray.

Andrew Peterson, author of the Wingfeather Saga, is perhaps better known in other circles as a songwriter and collaborator. His apparent boundless creativity means that his own reflections on how to be creative are worth reading in their own right. He has put together his own understanding of all of this in Adorning the Dark, part autobiographical and part wisdom for aspiring creatives. I have already marked a number of places in this book which I need to go back and reflect on.

This one didn’t fit in any of my other categories, although like some of the others, it is visually arresting and is not afraid to challenge traditional publishing genres. Wonders of the Living World ; Curiosity, Awe and The Meaning of Life by Ruth M. Bancewicz is a splendid overview of how science and Christian faith work beautifully together, including topics like cell development, molecule behaviour, convergent evolution and the ‘snuggle for existence’, with each chapter detailing some of the work of current scientists – all of whom have faith. If you can get hold of a version with images, do. The art is part of what makes this book so good. The science will take a little more head-scratching and it is recommended for those over 16, but the scientists and theologians make a strong case.

It has been another good year for reading and many other books did not make the cut. What books did you read in 2021 which you would recommend? Do leave a comment below!

© Lucy Marfleet, 2015-2022. Unauthorised use and/or duplication of this material without express and written permission from this blog’s author is strictly prohibited.