‘OK, that’s all then,’ I smiled. He had only just started reading the next section of his school book.

‘It’s not really the end, mummy,’ he told me with all the authority  of One Who Is Six. ‘Not The End. It’s just the end of the dinosaurs, silly.’

And the end of the dinosaurs was not the end of the story. It never is. There is usually some preamble in books about dinosaurs concerning Cretaceous, Jurassic, Triassic, the odd Tyrannosaurus Rex, a Diplodocus or two, Pterasaurs and similar words designed to frighten parents of children learning to read. But The End doesn’t come at the end. In Joe’s book this week it came about three-quarters of the way in. The End turned out to be the obligatory picture of a massive meteor bouncing violently against Earth some 65 million years ago. After The End there were several more pages: pictures of how fossils are formed, how they are discovered, and what dinosaur skeletons look like in museums. And it got me thinking again.

I was taught that a story has a Beginning, a Middle and an End.

But sometimes, it has a Beginning, a Middle, an End and Another End.

This is called a Multiple Coda. An extra little something. Jesus used it when telling the well-known story of the Prodigal Son (Luke 15). The story ends when the wayward son returns home and his father puts on a party, ‘for this son of mine was dead and is alive again; he was lost and is found’… all done; great. But not everything in the plot has been resolved. There is another brother who reacts and the story continues. He also gets a coda and a word from his father: ‘you are always with me, and everything I have is yours’. Scholars debated whether both endings belonged here, but once you study it you realise they do; it is a convention familiar to Jesus from many Old Testament narratives. Where there is more than one lack that needs liquidating the story takes more than one event to resolve it all at the end. For more on this, see Adele Berlin’s Poetics and Interpretation of Biblical Narrative (p.107), or more generally on the topic, Robert Alter’s The Art of Biblical Narrative.

I’ve noticed this convention more as I am made aware of it. On The Big Bang Theory episodes usually end with more than one final scene. It gives you warning that the ending is coming (brace yourself!) and uses the opportunity to resolve the storylines running in that particular show without having to do it all in one scene. 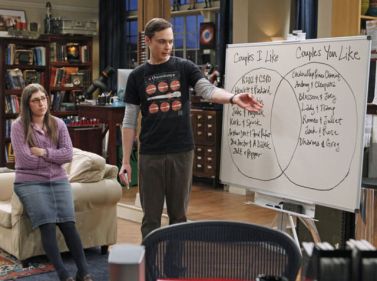 The work I’m doing and the way I am writing takes into account Old Testament narrative devices, so from time to time I will put more up on this blog about this. The conventions in OT narrative are rich and sometimes quite eye-opening.They will become part of my mid-week updates which serve to counter the 500 word short stories on Fridays I’m doing for fun. After some time working on the idea of writing, I’m now taking the plunge and getting on with it.

It is an exciting beginning.

© Lucy Marfleet, 2015-2020. Unauthorised use and/or duplication of this material without express and written permission from this blog’s author is strictly prohibited.